The report Micro-work in France. Behind Automation, New Forms of Precarious Labour? is the outcome of the OPLa project, funded by the Force Ouvrière union, by the research institution MSH Paris Saclay, and by the French Prime Minister’s agency France Stratégie.

Micro-work in France. Behind Automation, New Forms of Precarious Labour?

The past few years saw a remarkable proliferation of micro-work platforms. This relatively new activity consists in fragmented tasks (micro-tasks), completed directly onto on-line platforms and paid on a piece-rate ba-sis. Some examples are identifying objects in images, transcribing invoices, moderat-ing social media content, watching short videos, copying-pasting text or responding to online surveys. Often these repetitive tasks require low qualification and can be paid as little as few cents. This report presents the results of the DiPLab (“Digital Platform Labor”) OPLa research project and contributes to filling the gap in the literature on European micro-work platforms.

Conducted in 2018, the project is the first research on microwork in France that engages in a broader effort to measure the impact of new technologies on employment. With this objective, a comprehensive study of micro-work platforms in the French context has been realized, drawing on multiple sources: web-native data, an online survey involving approximatively 1000 micro-workers, and 92 qualitative in-depth interviews of workers, clients and platform owners. DiPLab’s PIs are Antonio Casilli (professor at Télécom Paris – Polytechnic Institute of Paris) and Paola Tubaro (associate research professor at the Laboratory of Research in Computer Science, French National Centre for Scientific Research). It includes researchers from different backgrounds in the social sciences.

DiPLab results show that micro-work is available to French workers through 23 micro-work platforms: in 2018 14 are owned by French companies, while the rest are international platforms using, among others, France-based micro-workers.–While frequently presented as a way of monetising downtime between every-day activities, micro-tasks are often instrumental to the development of artificial intelligence, helping to provide annotated data and output checks of smart technologies.–Micro-workers are mainly paid by piece-work and they have no room for price negotiation. In some cases, they are paid per hour, but still their reward depends on tasks done.– When it comes to their business mod-el, French micro-work platforms charge commission fees to clients, not workers.Among the original findings of the re-search is the identification of the typical profile of entrepreneurs in the French micro-work context. These are generally graduates of business or engineering schools, with a professional trajectory that includes previous experience in strategy or IT consulting firms, as well as in multinational IT companies. Start-up incubators play a key role: they supported the development of one third of the examined micro-work platforms. The financing sources of micro-working platforms are private funds and venture capital, with equal share.

HOW MANY PEOPLE MICRO-WORK IN FRANCE?

The present research estimates that more than 260 000 people perform, at least occasionally, micro-work in France. Such estimate is the sum of the number of registered users of the main platforms whose data are available, corrected to avoid duplicates (people using multiple platforms) and registrations outside of France. While not all micro-workers may operate every day, this figure represents a large reservoir from which the digital industry can take ac-cording to its needs, however floating they may be. Thus, this phenomenon requires at least the same attention that policymakers devote to urban transport platforms, which involve considerably fewer workers, though all are consistently engaged in the activity. In France, as in other world regions, plat-form-based micro-work is on the rise. In public debates, online labour is often associated to “uberisation” of the economy. Nonetheless, a relevant portion of the dig-ital platform labour performed in France does not concern app-based urban transportation, delivery or other forms of visible on-demand jobs. Micro-work is largely invisible and performed at home. It is less documented in academic and policy re-search.

WHY DO PEOPLE MICRO-WORK?

WHO ARE THE FRENCH MICRO-WORKERS?

The DiPLab research includes a survey over a period of three months of the French micro-work platform Foule Factory, with a questionnaire administered to approximately 1000 micro-workers. Foule Factory, which exclusively recruits its micro-workers in France, is particularly relevant because it is an industry leader in the country. The socio-demographic characteristics of micro-workers operating on Foule Factory reveal a somewhat alarming social setting:

–27.9% of micro-workers are inactive (aside from their micro-work);

–22% of micro-workers live below the poverty threshold (defined as half of the median income);

–The average monthly income that French workers earn from micro-tasks (all platforms combined) is very unevenly distributed with an average of about 21 euros per month;

–Only 18.5% users micro-work exclusively on one platform, while most of them are at least on two other platforms, websites or applications.

THE “TRIPLE SHIFT” OF MICRO-WORKING WOMEN

Among Foule Factory’s micro-workers a larger number of women have children compared to men (55% vs 39%). Women also devote 6 to 12 hours per week more than men to domestic work. The percentage of micro-workers having a formal employment is almost the same between men and women (about 61%), although part-time is more frequent among women (32% vs 11% for men). Such imbalances suggest that, through micro-work, women are increasingly facing a “triple-shift”: micro-work adds to the burdens of formal employment and care work.

Performing micro-tasks is not without repercussions on micro-workers. Most workers are unaware of clients’ identity and the purpose of tasks. In some cases, this be-comes very problematic for micro-workers, who question the fairness of their online activity, fearing that the tasks may not fit with their moral principles. Furthermore, micro-workers are made invisible by plat-forms, which prevent them from coming into contact with their fellow workers and sometimes with clients. Micro-workers sometimes challenge this invisibility by resorting to online forums as spaces of self-organisation, where they feel somewhat free to protest when a task is poorly paid and where they attempt to negotiate with platforms. Nonetheless, these spaces of self-organisation are limited, especially for forums hosted by micro-work platforms, which often ban members who are deemed too disruptive.

Micro-tasks performed on online plat-forms play a key role in the development of contemporary artificial intelligence (AI). The DiPLab research has identified three main ways in which micro-work is beneficial to AI systems:

– AI preparation: several DiPLab respondents have been actively involved in the preparation of large “training datasets” used to calibrate machine learning solutions. Humans are necessary to tag images, transcribe words, interpret bits of spoken conversations. As the market for AI is booming in France, so does the recruitment of AI-trainers on micro-work platforms.

–AI verification: existing technologies us-ing AI and learning algorithms, need to be overseen by micro-workers. DiPLab respondents have been checking the output of technologies as diverse as search engines, connected objects, text recognition software. As far as these tasks not only concern prototypes or test products, but also technologies that are already on the market, this seems to indicate that micro-work is a permanent feature of present-day automation.

–AI impersonation: Contrary to popular belief, in most cases AI systems are not yet able to perform completely independent tasks, and human work is still essential. Nonetheless, some companies that make large use of micro-work, market their services as AI solutions. Both workers and entrepreneurs interviewed within DiPLab have reported, and in some cases performed, micro-work re-packaged and branded as “artificial” intelligence.

Micro-work in France is establishing itself as a new way to cope with economic precariousness. At the same time, due to a high-ly fluctuating demand from companies, it does not provide professional stability, and its long-term impacts on the professional trajectories of the persons concerned re-main to be established. That is especially true for social groups with limited access to standard employment. How can we regulate this new labour force and strengthen its almost-inexistent social protection? This question concerns both trade unions and legislators. Specifically, given the predominant place of this new form of work in the development and commercialization of AI solutions, the question arises of how to ensure recognition of the contribution of workers to technological innovation at its true value. 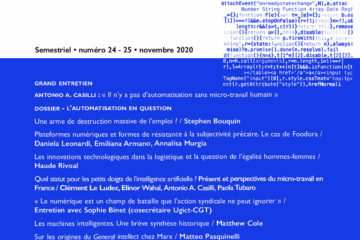 The French peer-reviewed journal Les Mondes du Travail devotes an entire special issue to work and automation. DiPLab is featured prominently, with a long interview with Antonio Casilli and an article on the social protection Read more…

Milagros Miceli, researcher at DiPLab and PhD candidate at TU Berlin, has received a Best Paper Award out of more than 1000 submissions for the paper she co-authored with Martin Schuessler and Tianling Yang. The Read more…

Our article, co-authored by Paola Tubaro, Clément Le Ludec, and Antonio Casilli, based on the OPLa research project has been published in the journal Work Organisation, Labour & Globalisation (open access). To cite the article: Read more…